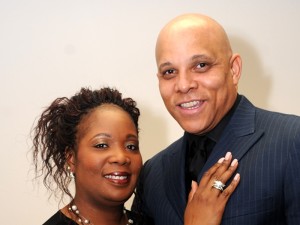 Pastor Peyton Sylvester Gray was born on July 16, 1963. At the age of 15, Peyton accepted the Lord Jesus Christ as his personal savior. The date was July 18, 1978. This was a life changing experience as it began the journey to a life of service, prophecy, and biblical teaching. At this time, Peyton was living in a foster home and attended a Baptist church with his foster parents. At the age of 17, Peyton came to Evangel Temple with a friend. At this point, a seed was planted at Evangel Temple that began to grow inside of him. It wasn’t until his sophomore year in college though that he began to attend regularly. He became an official member of Evangel Temple in 1986.

Quick to get involved, the same year Peyton became a member of Evangel, he joined the New Generation youth ministry under Pastor Timothy Seay. He soon became a servant leader under the next youth leader, Pastor James Holcomb. It was then that Peyton met another young dynamic preacher named Kevin Matthews, and the two developed a great friendship early on. Both Peyton and Kevin worked with the youth ministry and noticed that they had a lot in common. As the result of a dynamic sermon by Bishop Don Meares titled, “Armed & Dangerous,” the youth ministry was renamed A.R.M.Y (Anointed Radical Militant Youth). A.R.M.Y. began with 11 ministry leaders, but over time dwindled down until only 2 remained, one of which was Peyton Gray. He co-hosted a live evening call-in radio show, “Youth Talking to Youth,” which broadcasted on WYCB 1340 AM in the early 90’s.

Peyton has always had a sincere heart for the youth and has worked in the youth ministry for a number of years as one of the primary leaders. After hosting a joint youth conference with the Greater Mount Calvary Church of Washington, DC and the Jericho City of Praise Church of Largo, Maryland, the desire to host a youth conference at Evangel Cathedral was born. In 1991, Evangel Cathedral had its first youth conference titled “Boot Camp.” Boot Camp, one of the first of its kind in the nation, was a groundbreaking achievement as thousands of young people across the country dedicated their lives to Christ based on the teaching and the move of God through the conferences. Boot Camp became a model that a number of churches still use in setting up their own events.

Peyton was ordained a Minister in 1988 by Bishop Don Meares and was first declared a prophet the same year, with the Holy Spirit confirming his prophetic gift through the public validation by Bishop Don Meares. In 1998, Peyton joined the full time staff at Evangel Cathedral and was later ordained an Elder in 2005. He spent several years from 1988-2013 travelling and ministering for a number of churches and conferences (local and national). His responsibilities included oversight of several ministries (youth, marriage, education, transportation), artist relations for the church’s annual theatrical productions (Christmas Celebration, Easter), and instructing a number of classes in the Central Bible School since 1995.

In April 2014, Pastor Peyton launched 4-Him Covenant Church, a ministry led by the Spirit of Christ, dedicated to helping people develop a close relationship with God in their daily lives. Pastor Peyton is the husband of Martha Gray, and in June 2014 they celebrate 25 years of marriage. They are the proud parents of 3 boys; Peyton IV, Jared and Michael.